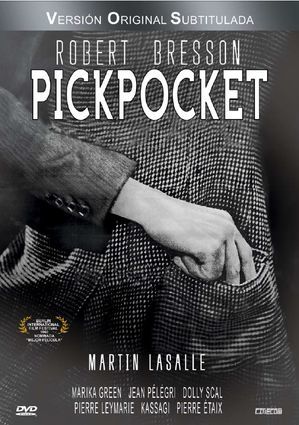 Pickpocket is a 1959 film directed by Robert Bresson. It is a loose adaptation of Crime and Punishment.

Michel (Martin LaSalle in his film debut) is a pickpocket in Paris. Wanting money, but disinclined to do anything as troublesome as getting a job, he lifts some cash from the purse of a woman at the racetrack. He's arrested by the cops, but since they can't prove that the money in his pocket is the money from the lady's purse, they let him go.

Michel cannot see any reason why he shouldn't be a thief, if he is clever enough to steal money from lesser people and not get caught. He makes the acquaintance of an experienced pickpocket who teaches him some tricks of the trade.

Meanwhile, Michel gets messages from his mother, who is ill and wants him to come visit her. He refuses to do so, even when Jeanne (Marika Green), a pretty young woman who lives in the room next to Michel's mom, begs him to.