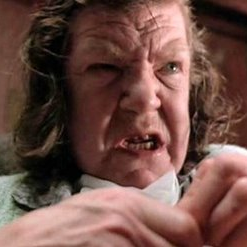 That doesn't look like a sane and friendly grandma.
"How do we get home, to the past when you were young and not so gross and wrinkly?" note Johnny and Dukey traveled far into the future and are consulting the (now old) twin sisters how to get back home.
— Johnny Test
Advertisement:

There's many kinds of old people out there. We've got the chill and nice ones, the grumpy ones, the perverts, the villains, the female counterparts of some of them...

...And then there's these guys.

When it comes down to a Senior Creep, his or her defining trait is usually being a not-so-beautiful old person with an unsettling or unfriendly demeanor that would make other characters loathe them (whether or not they react that way or at all). The first thing that may come to mind concerning physical looks is bad dental hygiene; he or she will most likely have nasty, rotten teeth (or maybe false teeth or no teeth at all) as a result of taking poor care of them. They may also have a wrinkly skin, a big nose, a balding head, scars and/or other physical traits that make a person unpleasant to look at, though not all of them are necessarily hideous or even remotely ugly.

Their behavior usually isn't any better than their looks, either. Said behavior may exhibit hostility, insanity, suspicious solitude, a creepy voice tone and enjoyment of morally questionable acts (like stalking someone else, whether they love them or not) among other things. They might as well be Obviously Evil as a way of reflecting their ugly looks, though at times chances are they're neutral or good instead. Feebleness may or may not be present.

Bonus points if other characters comment on their behavior and/or looks (usually negatively).

If the given circumstances are right, a Senior Creep may also be a resident of the Uncanny Valley and a source of Nightmare Fuel and Nausea Fuel.

Compare (and may overlap with) Grumpy Old Man, Dirty Old Man/Woman, Evil Old Folks and I Was Quite a Looker.

Not to be confused with a senior creeping.