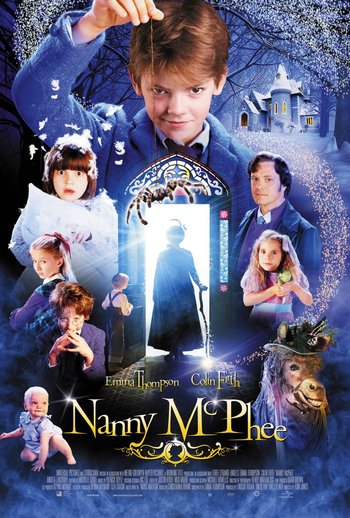 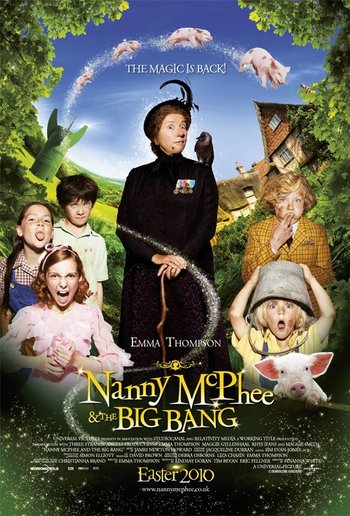 for the second film's poster.
"When you need me but do not want me, then I must stay. When you want me but no longer need me, then I have to go."
— Nanny McPhee

Cedric Brown (Colin Firth) is a hard-working widower who can't spend much time with his seven children, so he leaves them in the care of nannies. However, the children are very naughty and have managed, with pride, to scare the past seventeen nannies away. Running out of options, Mr. Brown listens to a mysterious voice's advice to call for a "Nanny McPhee". Nanny McPhee (Emma Thompson) turns out to be a hag-like woman with a crooked cane and a habit of appearing out of nowhere (though she does mention she did knock). But there's a secret to her care-taking — she has magic powers, which she uses to teach the children some important lessons.

Naughty children aren't the only problems Mr. Brown has to face. The truth is his late wife's aunt, Lady Adelaide Stitch, is supporting the family through a regular allowance, and she decides that unless Mr. Brown remarries by the end of the month, she will cut off those funds, meaning he will lose his house and his children. It's up to Nanny McPhee to help save a family on the brink of ruin.

The 2005 movie did well in theaters, and a sequel, Nanny McPhee and the Big Bang (called Nanny McPhee Returns in the United States for undisclosed reasons), premiered in 2010. Maggie Gyllenhaal plays a beleaguered housewife juggling a farm and three children, while awaiting her husband's return from the war. With the added pressure of her brother-in-law wanting her to sell off the farm (to pay off his own gambling debts), and two upper-class cousins staying over, Nanny McPhee is needed once again. The trailer can be seen here