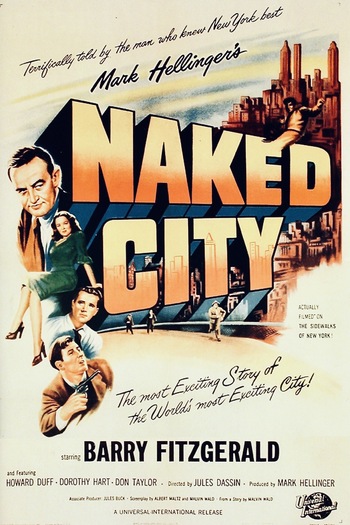 The Naked City is a 1948 American crime thriller film directed by Jules Dassin, based on a story by Malvin Wald. The cast includes Barry Fitzgerald, Howard Duff, Dorothy Hart, and Don Taylor.

Set and filmed in Manhattan, the story depicts the police investigation following the murder of a young model named Jean Dexter. Jean is found in her apartment, supposedly drowned in the bathtub, but the medical examiner tells at a glance that she was sedated and drowned. NYPD Detective Lieutenant Dan Muldoon (Fitzgerald) is placed in charge of the case and he sets about, with the help of other beat cops and detectives, to find the girl's killer.

The film won Academy Awards for its black-and-white cinematography (William H. Daniels) and editing (Paul Weatherwax). In 2007 it was selected for preservation in the U.S. National Film Registry by the Library of Congress.

"There are eight million stories in the naked city. This has been one of them."
— Closing Narration