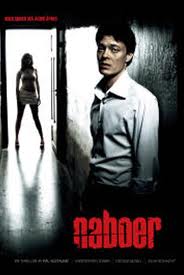 Naboer (roughly translated as Next Door) is a Norwegian psychological horror film created in 2005. It begins with a newly-divorced man helping to pack the bags for his ex-girlfriend Ingrid. When he’s done, he’s greeted by Anne, an attractive, mysterious woman, who claims to live in an apartment right next to him that he never noticed before. She tells him that she has a sister called Kim who was abused and asks him to watch her while she’s gone out. From that point onwards events begin to rapidly spiral out of control.

The film was made with the budget equivalent of 7 million US dollars, most of which went into the actors’ salaries. It isn’t widely known outside of Scandinavia, but it was praised internally for the sense of suspense and claustrophobia it has created. It is also one of the few films to have received an over-18 rating there.