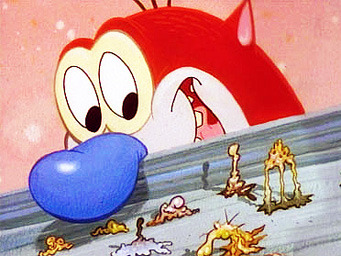 Jokes about boogers and/or snot. Used often for the sake of grossout and/or immaturity. 'Snot that hard to write a joke about all things mucus-related, so you shouldn't have to dig that deep to pick out a good example of this joke. Subtrope of Paste Eater. See also Nose Shove, Toilet Humour, Snot Bubble.

Jerry is mistaken for picking his nose.

Jerry is mistaken for picking his nose.