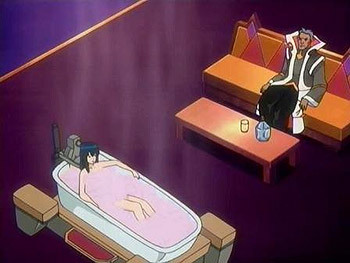 How and why is that bathtub there?
"*sigh* A hot bath is just the thing I need to clear my head.
(takes bath)
Ahh... (Beat) Wait... I don't own a bathtub!"
— Shantae, Shantae and the Pirate's Curse
Advertisement:

This trope happens when a character is shown bathing in a bathtub that is in an environment where a bathtub shouldn't be — usually in a non-private place. This can range from a bathtub just being in a living room or kitchen to one being placed on the top of a cliff. Most of the people who bathe in awkwardly placed bathtubs are pretty comfortable about bathing naked in front of other people; in fact most of the time that is the situation.

Honey Queen is first introduced bathing in her ship's figurehead in full view of everyone onboard.

Honey Queen is first introduced bathing in her ship's figurehead in full view of everyone onboard.