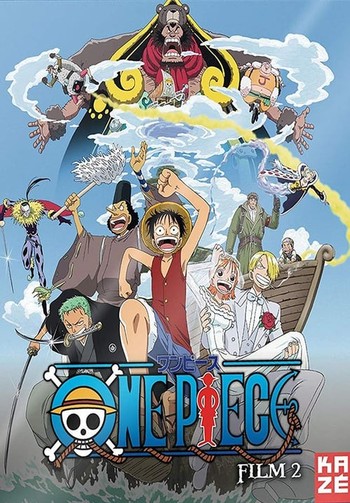 A clockwork island, playing card pirates and a wedding. Just another day for the Straw Hats.
Advertisement:

This is One Piece's second movie Clockwork Island Adventure. The movie presumably takes place at some point during Logue Town on their way to Reverse Mountain.

While relaxing on a beach, the Straw Hats find that Going Merry is stolen by thieves. They chase it down and encounter a dangerous group of pirates called the Trump Siblings with their leader the Bear King who wants to be the Pirate King. He then kidnaps Nami with the rest of the Straw Hats journeying to Clockwork Island to retrieve her and defeat the Trump Siblings before the Bear King marries her.

Usopp tricks Skunk One into dropping his guard by pretending to freak out.

Usopp tricks Skunk One into dropping his guard by pretending to freak out.