Film / Places in the Heart 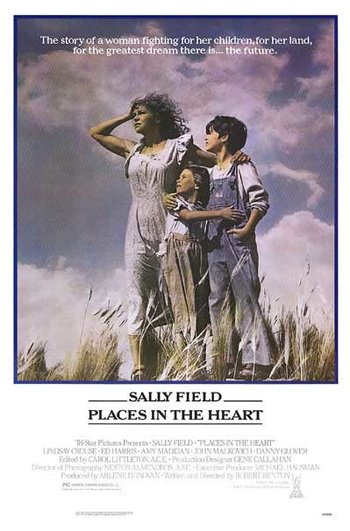 Places in the Heart is a 1984 film written and directed by Robert Benton.

1935, Waxahatchie, Texas, America deep in the grip of The Great Depression. Royce Spalding, the town sheriff, goes out to deal with an intoxicated black teenager who is taking random potshots with a revolver down by the railroad tracks. The boy, Wylie, accidentally shoots Royce in the chest, and he dies. Wylie is promptly lynched by the white men of the town.

Royce's wife Edna (Sally Field) is left a widow with two young children. Edna has spent her whole life homemaking and has no earthly idea about how to handle money—she doesn't even know how much her husband made. She's unpleasantly surprised to find out that their farm is heavily mortgaged, and if she can't come up with the payment for the bank by October, she and her children will be homeless.

Enter Moses (Danny Glover) a homeless, hungry laborer. Moses offers to do chores around the Spalding farm for nothing more than room and board. When he finds out about Edna's dilemma he suggests she plant cotton, a lucrative cash crop, in order to raise the money to keep the farm. Edna supplements her income by taking in as a boarder a blind man, Mr. Will (John Malkovich). However, the falling price of cotton puts Edna's home and the survival of her family in greater danger.

Sally Field's acceptance of her second Best Actress Oscar for her role in this film led to one of the most Narm-tastic moments in Academy Award history. An emotional Field said to the audience, "I can't deny the fact that you like me, right now, you like me!"—often misquoted as "you like me, you really like me!"