Literature / A Passage to India 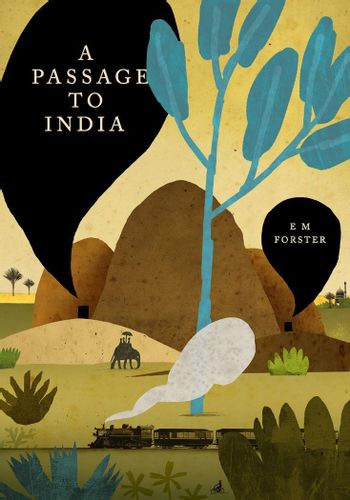 "Life never gives us what we want at the moment that we consider appropriate. Adventures do occur, but not punctually."
Advertisement:

A Passage to India is a 1924 novel by E. M. Forster, about relationships between Britain and India in the last days of the British Raj and the struggle for Indian independence.

The novel opens with Adela Quested and Mrs. Moore arriving at India. Adela is to marry Ronny Heaslop, Mrs. Moore's son and the city magistrate. While visiting a mosque one night, Mrs. Moore meets Dr. Aziz, an Indian physician. The two become close friends. At a later visit, Dr. Aziz agrees to take Mrs. Moore, Adela, Cyril Fielding (a pro-Indian teacher at a local school) and Narayan Godbole (a Hindu-Brahmin professor) on a visit to the Marabar Caves.

Something happens when Adela enters a cave by herself—the book is never clear on just what it is. She leaves the cave bloody and disheveled, and accuses Dr. Aziz of attempting to rape her. The man is arrested, which leads to the Indian community and Fielding springing to Aziz's defense. Fielding is ostracized from the English community. Mrs. Moore is criticized by Ronny for her belief that Aziz is innocent and her unwillingness to testify at the trial.

A screen adaptation was made in 1984. The last film directed by David Lean, it stars Judy Davis as Adela, Peggy Ashcroft as Mrs. Moore, Victor Banerjee as Aziz, James Fox as Fielding, and Alec Guinness as Godbole. Contrary to what a lot of people might think based on the quality actors, the source material, the setting, and the date of release it is not a Merchant Ivory film.

Alternative Title(s): A Passage To India