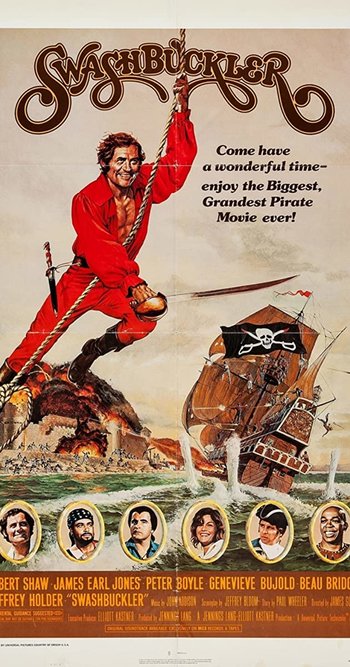 Swashbuckler is a romantic adventure film produced in the U.S. by Universal Studios and released in 1976. The film is based on the story "The Scarlet Buccaneer", written by Paul Wheeler and adapted for the screen by Jeffrey Bloom. It was directed by James Goldstone, and stars Robert Shaw, James Earl Jones, Peter Boyle, Geneviève Bujold, Beau Bridges and Geoffrey Holder.

In Jamaica in 1718, a band of pirates led by Captain “Red” Ned Lynch oppose a greedy overlord, the evil Lord Durant. Durant has ruthlessly imprisoned his Lord High Justice and mercilessly evicted the judge's wife and daughter. The daughter, Jane Barnet, attempts a rescue with Lynch’s help.

A Box Office Bomb when released, Swashbuckler has gone on to become a Cult Classic.