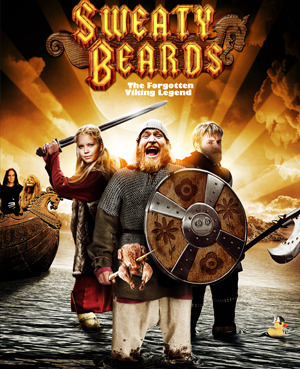 Sweaty Beards is a 2010 Swedish movie which aims to answer the age-old question of what would happen if you mix Vikings with Monty Python and The Karate Kid. Oswald is a fat, cowardly Viking living in 10th century Sweden. He's regularly bullied and abused by his peers for his failings, including his considerably more badass brother Sigtrygg. One night, Oswald and Sigtryggs parents are murdered by the evil Finnish warrior, Perset Olale, so Sigtrygg and Oswald decide to seek out the help of Kolskägg, to awaken Oswalds latent powers as a Berserker. This fails spectacularly, not only causing Oswald to be outlawed, but leaving Sigtrygg halfdead as well. Oswald has no choice but to flee to Uppland, where he meets up with King Erik Widearm and the Uppland Freedom Army. Will Oswald be able to become a Berserker and reclaim his familys honor in the island deathmatch tournament?

All of the dialogue is done in an intentionallly exaggerated "Swenglish" accent which can be a real chore to sit through, if you don't find it funny.