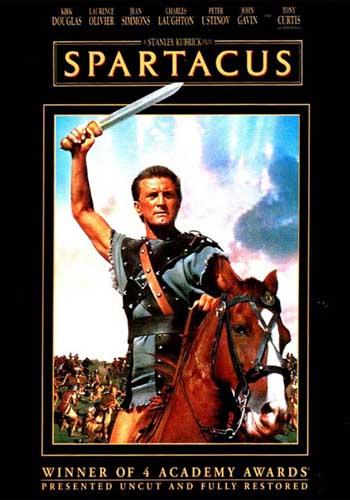 A classic 1960 film by Stanley Kubrick, starring Kirk Douglas in one of his most famous roles, Laurence Olivier, Charles Laughton, Jean Simmons, Peter Ustinov and Tony Curtis. It was based on the 1951 novel by Howard Fast, with a screenplay by Dalton Trumbo. It was Inspired by… history, and a rather subversive version of the Sword and Sandal movies that preceded it by depicting The Roman Republic as a Crapsack World. It's also notable for being Kubrick's longest film, clocking in at 3 hours and 17 minutes, just ten minutes longer than the runner-up, Barry Lyndon.

Spartacus is a slave from the last years of the Roman Republic. He escapes and becomes the leader of a slave army that nobly fights the Roman forces, who are under the command of an evil aristocrat, Marcus Licinius Crassus.

The film was banned in some areas because of violence and sexual content. A re-release in 1967 cut a lot of the objectionable material, including a dialogue Crassus has with his servant about his liking both oysters and snails. It's especially noteworthy because the audio track for this scene was lost in the 1970s. When Spartacus was restored in 1991 the scene was recreated: Tony Curtis redubbed his lines at the age of 66. Laurence Olivier was dead by then, so his lines were dubbed by Anthony Hopkins, who received Special Thanks in the restored version's credits.

Definitely an Epic Movie. The filming went on for years — at the time a reporter asked Peter Ustinov's young daughter what he did for a living, and she replied "Spartacus!". Ustinov not only played Batiatus, the owner of the gladitorial school from which Spartacus begins his slave revolt, he completely re-wrote all of Charles Laughton's scenes, after the latter threatened to quit the film over his displeasure with the script — or the weather — or the time of day (Laughton was about as unpredictable and moody as they come). When praised for the script, the credited screenwriter Dalton Trumbo didn't mention that these re-writes (particularly the witty scenes between Ustinov and Laughton) came pouring in.

Spartacus was also a landmark movie for the fact that, along with Exodus, it ended The Hollywood Blacklist period. As per the unspoken rules, no blacklisted screenwriter could officially work in Hollywood, yet Trumbo was blacklisted (in practise, these screenwriters were employed under front names). By publicly crediting him, while he was also praised for Exodus, Kirk Douglas decisively helped in ending the blacklist, once and for all.

The film has a character sheet.

For the Starz series see Spartacus: Blood and Sand.

Example of:
I Am Spartacus