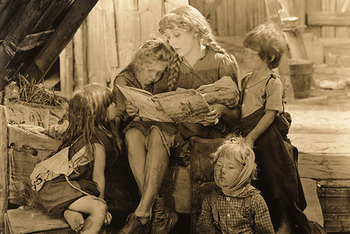 Sparrows is a silent film from 1926 starring Mary Pickford. Pickford is Molly, the oldest child in a horrific unlicensed orphanage—a "baby farm"—owned by the monstrous Mr. Grimes and his equally horrible wife and son. Mr. Grimes feeds the children starvation fare and uses them for forced labor on his ugly little farm stuck in the middle of a festering, alligator-ridden swamp. Molly for her part is the substitute mother and caretaker for all the hungry little children stuck with Mr. Grimes. One day Mr. Grimes enters into riskier criminal activity when he accepts a toddler that has been kidnapped from a rich family. The idea is to hold the child for ransom, but when the kidnapping makes front-page headlines, Mr. Grimes gets nervous and decides to drown the child in the swamp. Molly finds out about this and decides to make a break for freedom with the kids.

This rather treacly, sentimental film was Pickford's next-to-last silent picture. Pickford, 33 years old when the movie was made, appears in one of her typical Dawson Casting roles.