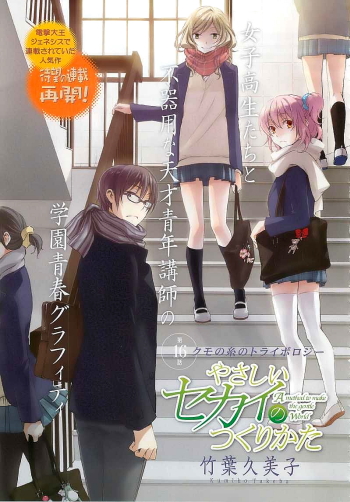 Yuu Tomonaga is in a bit of a lurch. A certified 19-year old genius, as little as a year before, he was part of a prestigious research project in the US that was, in his mind, this close to proving the theory he formulated. However, that all ended when the companies supporting the project suddenly pulled their funding. Angry at their perceived short-sightedness, Yuu impulsively tells his professor that he'd find a way to restart the project on his own, and quits his research post. He returns home to Japan, confident that he'd be able to find funding back home.

Things... haven't exactly worked out. In the process of chasing funding leads, he soon discovers that he's quickly run out of money for his daily expenses. Fortunately his old teacher — the very same one who discovered his innate intellectual gift, and pushed for him to not let it go to waste — has a solution to his monetary woes, at least for the short term. And even better, he gains a place where he can pursue his research on the side. The catch? Said solution entails helping out at the school his old teacher is currently working in, which is apparently an all-girls school.

He's obviously not thrilled. He's also not thrilled about not being informed about the fact that the teacher he was replacing apparently sexually harassed his students, meaning the students will automatically be on guard around him. It's no wonder that, even on his first day, he's already wishing to get back to his research. However, a chance encounter with Hirose Aoi, one of the girls of his class seems to be enough to hold off leaving. This is because Aoi, supposedly one of the slower girls of the class is hiding a secret, something he had happened upon by accident: Aoi is not slow. In fact she's actually very smart, which makes him wonder just why she's stuck in a run-of-the-mill school, and what's more, hiding her talent.

This little mystery is enough to make him stay, but in the process he's found himself gradually drawn into the lives of his students, something he had not counted on. Will Yuu ever get back to his research project at this rate?

Yasashii Sekai no Tsukurikattanote The tagline says A Method to Make the Gentle World but a more accurate translation would be A Recipe For A Gentler World is being serialized in Dengeki Daioh Genesis. It is completed with 6 volumes.