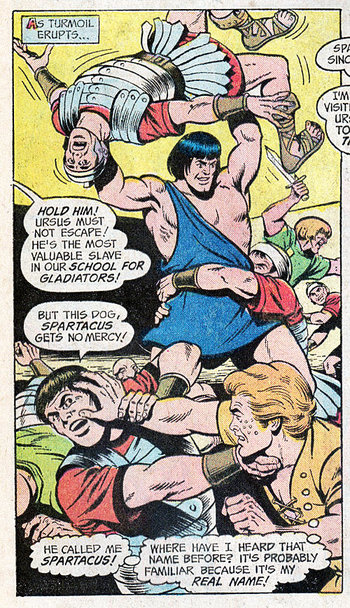 A staple of Sword and Sandal and Lost World stories, the hero is captured and forced into the gladiatorial pits as a slave. He will be trained as gladiator (giving him a justification for becoming a badass warrior if he was not one already). He will win numerous bouts, becoming a favourite of the fans and winning the respect of his fellow gladiators. He will then incite his fellow gladiators to rise up and break out of the slave pits, leaving the hero at the head of a ready-made army of highly trained warriors with which to overthrow the Evil Overlord who condemned him to the pits.

Subtrope of Gladiator Games as well as Slave Liberation. The main alternative for captive heroes is in a Slave Galley.