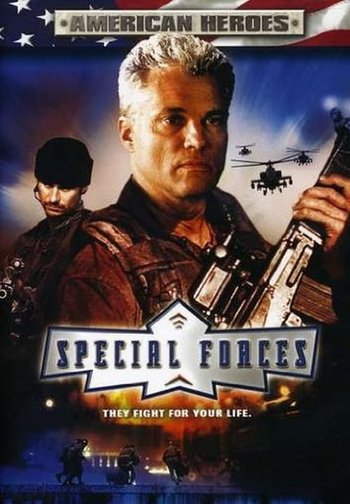 Don't you hate it when the best character in the film note  Scott Adkins, duh gets left out of the DVD cover?
Advertisement:

An atypical Men-on-a-Mission film, the titular Special Forces are a band of American-based Private Military Contractors sent into the war-torn fictional Eastern European nation of Moldonia to rescue a kidnapped reporter, Wendy Teller, arrested while investigating a genocide committed by it's local military leader, General Hasib Rafendek. Upon arrival in Moldonia, the Special Forces end up working together with Talbot (Scott), a British operative, who is desperate to avenge his partner killed in the line of duty.

They started off trying to rescue a chick, and ends up overthrowing a dictator and liberating a small country from tyranny. Wait a minute, that sounds familiar…