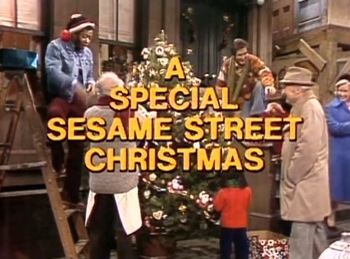 A Special Sesame Street Christmas is a 1978 TV special featuring most of the human cast of Sesame Street plus Big Bird, Barkley, Oscar the Grouch, and several celebrity guests including Leslie Uggams (who's basically the star of the show), Henry Fonda, Ethel Merman, Michael Jackson, Anne Murray, Imogene Coca, and Dick Smothers.

The special centers around a retelling of the classic tale A Christmas Carol, with Oscar (of course) playing the role of the Scrooge-like character that does not like Christmas. Three ghosts (all celebrities) show up to show him the error of his ways.

It was one of the first Sesame Street projects to air on a commercial network, debuting on CBS the same year that Christmas Eve on Sesame Street aired on the show's usual home of PBS (in fact, it aired the same week—Christmas Eve debuted on a Sunday, while this show ran five days later on Friday). In a departure from the latter special and the series itself, this one was not produced by the Children's Television Workshop (forerunner of today's Sesame Workshop) but by Bob Banner (known for producing The Carol Burnett Show and Perry Como's TV specials).