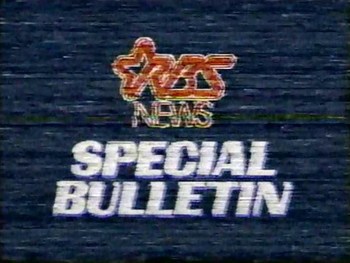 Commercial Voiceover: Move on up to RBS!
Chorus: We're movi–
Announcer: We interrupt our regular programming to bring you this Special Bulletin from RBS News...
Advertisement:

Thus begins this 1983 NBC Made-for-TV movie and one of director Edward Zwick's pre-Hollywood works, about a group of domestic terrorists who claim to have a homemade nuclear bomb aboard a tugboat in the harbor of Charleston, South Carolina. They want to make a stand against the proliferation of nuclear weapons; unless they receive the detonating modules from all 968 nuclear weapons in the Charleston area, which they will then dump into the Atlantic to render those weapons useless, within the next thirty hours, they will detonate their own bomb.

The media doesn't just cover this event, but is also part of it: an RBS affiliate's field reporter and cameraman, covering an unrelated story on the same dock, are kidnapped during the terrorists' initial gunfight with the Coast Guard. One of the ideas the film examines is whether the presence and promotion of the media makes such events more likely to happen; by the next morning, RBS's coverage is no longer generic interruptions with the above "special bulletin" announcement, but a lively graphic introduction naming the coverage "Flashpoint: America Under Siege," with the stars and stripes, a zoom-in on South Carolina and the city of Charleston, and an up-tempo music track.

The movie recreates the look of a "live" TV broadcast, being shot on videotape rather than film, with faux-impromptu dialogue (hesitations, stumbles, overlaps) and minor technical glitches (as often occur during a live telecast) intensifying the effect. The camerawork resulted in one of its four Emmy wins (it also won for Outstanding Drama Special, Outstanding Video Tape Editing for a Limited Series or a Special, and Outstanding Writing in a Limited Series or a Special).

More than a decade later, the same formula was used again, only in an alien invasion context, for 1994's Without Warning.