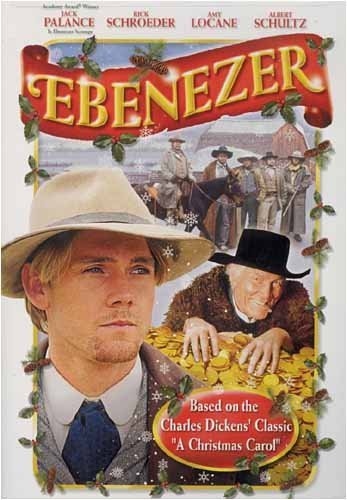 Ebenezer is a 1998 made-for-TV movie starring Jack Palance as Ebenezer Scrooge, in a Setting Update of Charles Dickens's A Christmas Carol.

This adaptation sets the story in the Canadian frontier, and Scrooge is a hard-drinking gunslinger and saloon owner. On Christmas Eve, he refuses his nephew Fred's invitation, cheats young cowpoke Sam Benson out of his land in a card game, fires his employee Bob Cratchitt, and spends a Christmas Eve dinner at the local brothel, where his deceased partner Marlowe's daughter Erica works as a cook. Besides Marlowe's ghost and the three spirits of Christmas coming to make him repent, Sam challenges Scrooge to a showdown at high noon the following day, which Sam is sure to lose.

Not to be confused with Ebenezer, an independent musical prequel also based on A Christmas Carol.