Anime / Earwig and the Witch 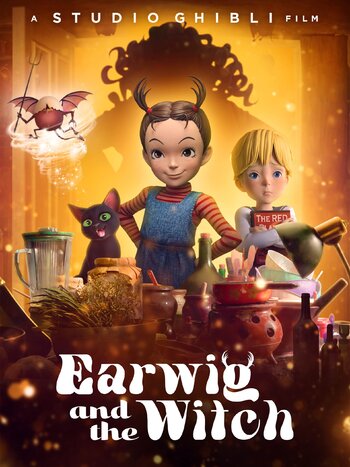 Earwig and the Witch (アーヤと魔女: Hepburn: Āya to Majo, 2021) is Studio Ghibli's 22nd film, and the third film directed by Goro Miyazaki, the son of studio founder Hayao Miyazaki. Adapted from Diana Wynne Jones' novel of the same name, it tells the story of a little orphan girl who is adopted by the Wicked Witch Bella Yaga. She is taken into her home where she meets a talking cat and the silent, yet ill-tempered Mandrake and from there she experiences magic.

A co-production between Studio Ghibli, NHK and NHK Enterprises, the film originally aired on television on December 30, 2020 on NHK General TV, and was scheduled to be released in theaters by Toho on April 29, 2021 before the release date was postponed due to the COVID-19 Pandemic.

Of note, it is Studio Ghibli's first All-CGI Cartoon, and their first Made-for-TV film since Ocean Waves in 1993.

Earwig and the Witch contains the following tropes: