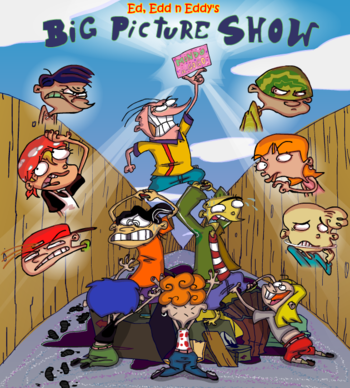 The film opens as the trio of Eds are fleeing the cul-de-sac after their latest money-making scheme goes horribly awry. Eddy suggests the trio seek refuge at the home of Eddy's ever-elusive brother; after they realize they have no idea where Eddy's brother lives, they spend most of the movie wandering around in search of him. Pursuing the Eds are their victims—Kevin, Nazz, Rolf, and Jonny (with Plank!)—who have seemingly graduated to wanting the Eds literally dead. Pursuing that group are the Eds' Abhorrent Admirers, the Kanker Sisters, who are irked by the idea of anyone but them pummeling their "boyfriends". And there to watch it all unfold are Sarah and Jimmy, who somehow get mixed up with the Kankers. One thing is certain: Eddy must find his big bro if the Eds hope to see the light of day ever again.

Big Picture Show ties up several of the show's loose ends by wrapping up many of the main cast's arcs and showing a more sympathetic side of some of the more sadistic characters.

Spoilers are now marked! (And rightfully so, but only on this page.)

Jonny: What? There's no time left? It's the end of the movie? What movie?!