Hypocrite Has a Point 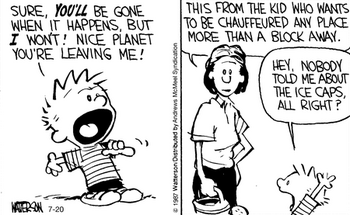 "Let's compromise, you can carry me on your back instead."
"...Yeah, so when the pot calls the kettle black, the kettle's still fuckin' black."
— Billie, Dumbing of Age
Advertisement:

If there's anything people agree on, it's that being a Hypocrite is bad. The most negative of spotlights are trained on those who do not practice what they preach. If someone is a hypocrite, they are assumed to be rightly contemptible and completely wrong.

If only things were that simple.

Even if a person is a hypocrite, they can still be right about something. If Bob The Alcoholic criticizes Tom for drinking away his pain, he still raises the point that Tom could find a better way of solving his issues. If high school dropout Alice chastises Sammy for failing college, she could then say that Sammy shouldn't lose sight of her future. This goes double if Alice is Sammy’s mother.

See also Hypocrisy Nod, Ad Hominem, At Least I Admit It. This trope may also be related to "Not So Different" Remark and Brutal Honesty.

Half-sib to Strawman Has a Point, where it's the audience, rather than another character who says "Wait, that character is being presented as though he's wrong, but he's not, at least not entirely."

Compare Jacob Marley Warning, when someone warns another person against making the same life choices they did, justified because they can offer the perspective of having experienced how it will turn out badly.

Contrast Psychological Projection, where the character's accusations are based entirely on their own faults.

In real life, this is represented by the well-known logical fallacy called tu quoque, or the appeal to hypocrisy. The logical fallacy is believing that someone is wrong just because they are a hypocrite, whereas in fact, at least philosophically, they are actually at least as authoritative as anyone else on the subject, and usually even more likely to be correct because they probably have had a negative experience — for instance, an unrepentant drug addict is quite possibly one of the best people to listen to when they tell you not to do drugs, or that some drug laws are bad and unfairly affect minorities, or even that certain drugs aren't so bad. Nevertheless, politicians continue to be denounced as hypocrites by their adversaries and anyone else who wants to win an argument, not least of which because it is also, sadly, a very successful tactic. It is also often known as "whataboutism", especially when politicians and state actors fallaciously call one another out on hypocrisy rather than admitting their own faults.

Just to clarify, this trope refers to people in-universe recognizing the fallacy and rising above it.