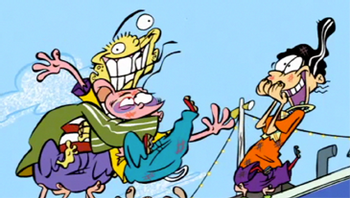 Finally earning their happy ending.
Eddy: I made it all up, Double-D. Everything about my brother was a lie. I just made things up, so everyone would like me, think I was cool. But boy, was I wrong! The scam, my brother, this... when am I gonna learn, Double-D?
Edd: ...I think you just have, Eddy.
Advertisement:

Let's just say that a couple scenes in The Movie are bound to make you go "aww..."