Film / The Song of Bernadette 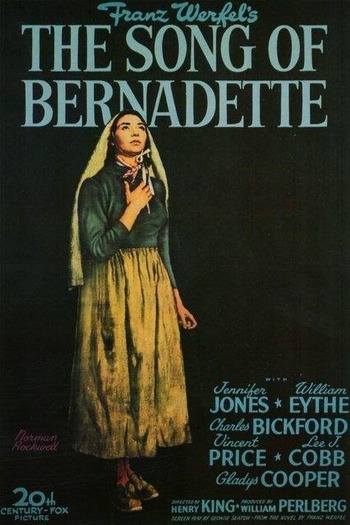 "The spring is not for me..."
Advertisement:

A 1943 classic about the life of Saint Bernadette Soubirous

, a shepherdess and later nun who saw eighteen visions of the Virgin Mary at Lourdes, France when she was a teenager. Adapted from Franz Werfel's novel of the same name, the film is directed by Henry King and stars Jennifer Jones in an Academy Award-winning turn as Bernadette. Also in the cast are Charles Bickford, William Eythe, Gladys Cooper, Vincent Price, Lee J. Cobb, Anne Revere, and Linda Darnell.

From IMDb: "In 1858 France, Bernadette, an adolescent peasant girl, has a vision of "a beautiful lady" in the city dump. She never claims it to be anything other than this, but the townspeople all assume it to be the Virgin Mary. The pompous government officials think she is nuts, and do their best to suppress the girl and her followers, and the church wants nothing to do with the whole matter. But as Bernadette attracts wider and wider attention, the phenomenon overtakes everyone in the town, and transforms their lives."

Tropes provided by this film: