Film / Shadow of a Doubt 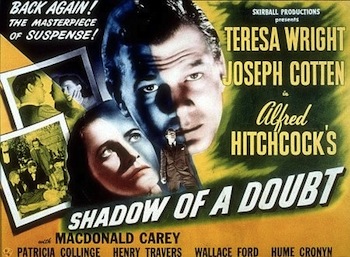 Shadow of a Doubt is a 1943 suspense film directed by Alfred Hitchcock. Joseph Cotten stars as Charlie, a Serial Killer on the run who comes back to his hometown of Santa Rosa, California to hide from the police. Teresa Wright is his niece, also called Charlie, who idolizes him—until the agents hunting "Uncle Charlie" reveal to her who her uncle really is.

Said to be Hitchcock's favorite of his own films. Appropriately for a film set in a small town, the screenplay was co-written by Thornton Wilder. Check out Roger Ebert's discussion on it here

The film has been remade twice: in 1958 as Step Down to Terror, and in 1991 under the original title as a TV movie in which Mark Harmon portrayed Uncle Charlie. It also served as the inspiration for Park Chan-wook's Stoker.

In 1991, the film was selected for preservation in the United States National Film Registry by the Library of Congress.