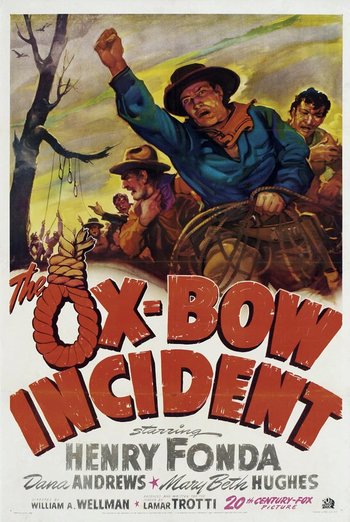 "God better have mercy on you. You won't get any from me."
— Sheriff Risley
Advertisement:

A 1940 Western novel by Walter Van Tilburg Clark, The Ox-Bow Incident was adapted into a film in 1943. That film, directed by William A. Wellman and starring Henry Fonda, Dana Andrews, Anthony Quinn, and Mary Beth Hughes, received its only Academy Award nomination for Best Picture.

Bridger's Well, Nevada, 1885: A rancher named Larry Kinkaid is reported dead, murdered by cattle rustlers. Deputy Butch Mapes forms an illegal posse to bring back the suspects alive for trial. Once they catch up to them, the posse, under the influence of Major Tetley (Frank Conroy), decide to hang them on the spot. Meanwhile, drifters Art Croft (Harry Morgan) and Gil Carter (Fonda) are among the few who want to see the crooks tried fairly in court.

This film is noted for its scathing indictment of vigilantism, and showcases what it means to take the law into one's own hands and ignore due process.