You may be looking for Solaris, the 1972 film adaptation of the same novel, directed by Andrei Tarkovsky. 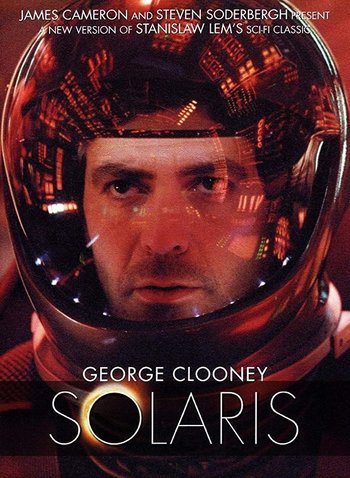 If you think that there is a solution, you'll die here.
Chris: Am I alive, or dead?
Rheya : We don't have to think like that any more. We're together now. Everything we've done is forgiven. Everything.

Chris Kelvin (Clooney) is a future psychiatrist on Earth, where he is eking out a joyless existence after the death of his wife, Rheya (Natascha McElhone). Out of the blue he gets a visit from agents of DBA, a private corporation involved in space exploration. They inform Chris they've lost contact with the Solaris expedition, headed by Dr. Gibarian (Ulrich Tukur), a close friend of Kelvin's. The last communication with the ship is a recording from Gibarian, pleading for Chris to come to Solaris, but with no explanation other than requiring his expertise as a psychiatrist. Gibarian's unstable behavior resulted in DBA sending a mission to recover the ship, but all communication with the second team was lost as they approached Solaris. Believing that Gibarian is possibly holding them hostage and that he was reaching out to his friend for help, DBA asks Kelvin to travel to Solaris to negotiate the safe return of both crews.

Kelvin is suspicious but agrees to go. When he arrives at Solaris, he finds the Prometheus in orbit, abandoned, with signs of a bloody struggle in its docking bay. He eventually finds a pair of survivors but both are unwilling to say what happened. Dr. Snow (Jeremy Davies) only asks Kelvin how long he thinks he can go without sleep, and Dr. Gordon (Viola Davis) explicitly tells Kelvin, "There's no point discussing it until it starts happening to you."

Kelvin is convinced the crew is experiencing some kind of mass hysteria, until he falls asleep. He awakes with Rheya snuggled next to him, apparently brought back to life by Solaris. At odds with the surviving crew and with his own scientific principles, he has to try and figure out what Solaris is and what it wants before going mad from the impossible situation that drove the members of the expedition to kill themselves.