Catch Your Death of Cold 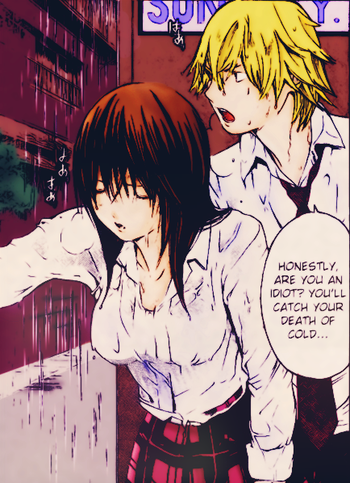 So please call me, baby
Wherever you are
It's too cold to be out walking in the streets
We do crazy things when we're wounded
Everyone's a bit insane
I don't want you catching your death of cold
Out walking in the rain
— Tom Waits, "Please Call Me, Baby", The Heart of Saturday Night
Advertisement:

The Common Cold is a very mild diseasenote in healthy people, anyway caused by a number of different viruses that largely have nothing in common other than most of the symptoms they cause. It has been around as long as anyone can remember, but has yet to be stamped out due to the sheer number of "cold" viruses and their different properties. Almost as durable as the disease itself is the myth that it's directly caused by exposure to cold temperatures, and that's what this trope is about.

The origins of the disease's name dates back to ancient times. Long before the advent of germ theory or any understanding of how the body works, it was believed that one's health was dependent on keeping the body's "humours" - blood, phlegm, yellow bile, and black bile - in balance. The patient exposed to cold temperatures was thought to have taken in a "lump" of cold which would increase the amount of phlegm, so any disease that caused a patient to produce phlegm was said to be caused by "catching cold". In addition, people in pre-industrial times were more likely to embark on travel in the late fall because that's when the year's harvest was sold. Those that went to market (quite possibly through cold, wet conditions) would bring back whatever infections they had been exposed to. Since these infections usually spread through the community in the early winter when the temperature was coincidentally dropping, the common cold gained an additional association with cold weather.

In truth, because the cold can only be caught from other people, you're far less likely to catch it if you go wandering through the wilderness on a cold night, although prolonged exposure may well weaken your immune system against an infection already acquired. You'd do far better to worry about the much more severe consequences of real exposure, such as hypothermia and frostbite.

Despite the fact that the actual cause of the cold has been fairly common knowledge for about a hundred years now, this fact has not seemed to permeate the public consciousness very far. (In English-speaking communities, this confusion may just be caused by its being called a 'cold'.) Mothers still caution their children to button up when going outside lest they catch cold, and any character in fiction, especially animation, will instantly begin to sneeze and cough after being chilled or, especially, frozen. It helps that a lot of symptoms associated with a cold can also occur simply by being in a cold environment; these symptoms may go away once the person experiencing them has been warmed up again, which is sometimes Truth in Television, as some people Freeze Sneeze when it's cold, but often these symptoms are treated like a cold.

There's some legitimacy to this claim, to wit: having a rapid change in temperature (such as a home with a roaring fire to the freezing midwinter outdoors) can weaken your immune system and make you more susceptible to showing symptoms of the common cold. So, going outside while properly protected from the cold really is good advice for avoiding virus-related unpleasantness, and other cold-related unpleasantness. Cold air can also irritate the respiratory tract enough to cause a temporary increase in mucus production, but in that case it's more like having a very mild asthma attack than an actual infection.

The trope, although pretty much a Discredited Trope at this point, is still used faithfully in fiction and media — exposure to cold means you are going to 'catch' a cold or something worse. Once one has caught cold, if it's a Gross-Out Show, expect rivers of green mucus, horrible shots of runny noses and hankies and tissues dripping with said mucus.

A common occurrence is when a character takes care to remove their wet clothes if they get soaked in order to prevent sickness, often leading to awkward situations such as Take Off Your Clothes request being misinterpreted or leading to Undressing the Unconscious situation if the character with wet clothes has blacked out. If no other clothes are available they will likely be Hanging Our Clothes to Dry. In a desperate situation they may resort to Intimate Healing.

The variations of this trope are rarely combined with Redemption in the Rain, Snow Means Cold, or Partly Cloudy with a Chance of Death.

See also: Freeze Sneeze. When the cold really is fatal, see Snow Means Death. When cartoon characters catch a cold from the cold, they're liable to be shown recovering with a Foot Bath Treatment and/or an Illness Blanket.