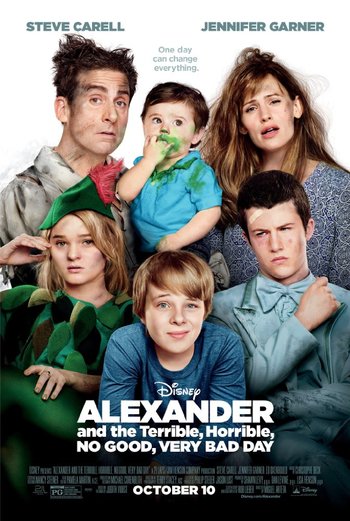 Get ready for the best worst day of your life.
Advertisement:

Alexander and the Terrible, Horrible, No Good, Very Bad Day is a family comedy film released on October 10, 2014. It was directed by Miguel Arteta from a screenplay written by Rob Lieber. The film stars Steve Carell, Jennifer Garner, and Ed Oxenbould, and is an Adaptation Expansion of Judith Viorst's 1972 children's book of the same name.

Alexander Cooper spends a day (revealed to be his birthday no less) miserable as the rest of the family are reveling too much in their success to notice his rotten day. After ending up making a birthday sundae for himself, he wishes his family could experience the same sort of disappointment he goes through. What happens the next day is just that...