Western Animation / The Year Without a Santa Claus 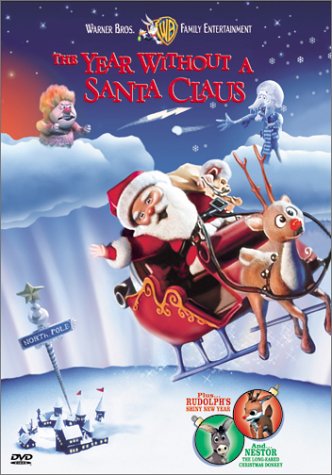 Did you ever hear of that terrible year
Way back before you were born?
When Santa Claus took a holiday
On the night before Christmas morn'?
— Mrs. Claus, "The Year Without a Santa Claus"
Advertisement:

The Year Without a Santa Claus is a Stop Motion puppet-animated (called "Animagic") holiday special by Rankin/Bass Productions that debuted on ABC in 1974. This time, Santa Claus (voiced by Mickey Rooney, reprising the role from 1970's Santa Claus Is Comin' to Town) decides to take a holiday from Christmas when he becomes convinced that nobody really cares anymore. In an effort to get Christmas back on, Mrs. Claus (voiced by Shirley Booth in her final appearance) sends a pair of elves out to find enough Christmas spirit left in the world to make Santa change his mind. Hilarity Ensues, contributed to in no small part by the memorable obstructiveness of the climate-ruling Miser Brothers, Snow Miser (Dick Shawn) and Heat Miser (George S. Irving).

The script was written by William Keenan (instead of Rankin-Bass stalwart Romeo Muller), with the studio's usual mixture of classic Christmas tunes with original songs by Maury Laws and co-producer Jules Bass.

A live-action remake aired on NBC in 2006, starring John Goodman as Santa, Michael McKean as Snow Miser, and Harvey Fierstein as Heat Miser.

Followed in 2008 by the non-Rankin/Bass A Miser Brothers Christmas, in which Heat Miser and Snow Miser are forced to work together to save Christmas. Additionally, at least two other Rankin/Bass specials, Rudolph's Shiny New Year and Nestor, the Long-Eared Christmas Donkey, as seen on the DVD cover (right), seem to be set within the same universe, as they have same Santa Claus and the same elf uniforms. Mickey Rooney would later portray Santa in Rudolph and Frosty's Christmas in July, the unrelated 2005 NBC special The Happy Elf, and the 2008 live-action short film Wreck the Halls.

These tropes are too much!