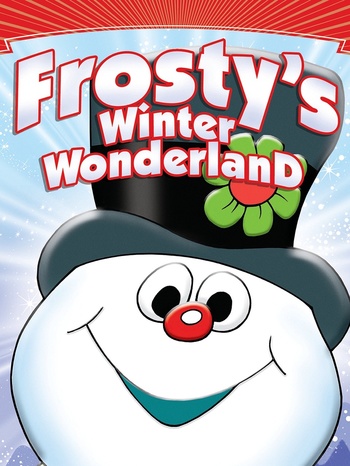 Frosty's Winter Wonderland is a Christmas Special produced for Rankin/Bass released in 1976, and a direct sequel to Frosty the Snowman. It features narration by Andy Griffith, and features the voices of Dennis Day and Shelley Winters.
Advertisement:

Some time after the events of the original special, Frosty decides to visit a group of village children, but is lonely when they go home. To ensure he's not alone and sad, the children build him a snow wife, Crystal, but his actions attract jealousy from the winter elemental Jack Frost, who wants rid of Frosty so the children can adore him instead.

Followed by the 1979 feature film Rudolph and Frosty's Christmas in July, which gave fans the chance to see Frosty and Crystal in stop-motion 3D, and as parents! The Rankin-Bass version of Frosty would return in 2005's The Legend of Frosty the Snowman, now voiced by Bill Fagerbakke. Not directly related to 1992's Frosty Returns, which is utilized as a companion to the original on television and home video, partially due to the split of Rankin-Bass holdings between NBCUniversal (productions from 1964-1973) and Warner Bros. (1974 and onward).