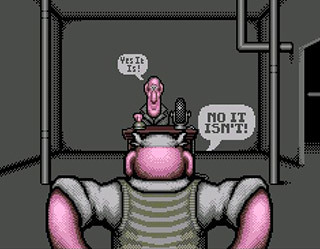 Everyone has different opinions, and may both conflict; this is where arguing comes in. A quarrel between two characters in which neither side really has any valid points to back up their argument, or they just aren't listening to each other, so for want of trying to win, the argument descends into bickering in the basic format of "Is not!" "Is too!" "Is not!" "Is too!"

Often used to indicate general childishness or immaturity. Arguing, however, isn't necessarily part of hatred and anger towards other characters or people, but it is possible that sometimes they can both merge into each other, known as a feud.

This may end with any of the following:

This may date back as far as Commedia dell'Arte, making it Older Than Steam. See also No, You, a similar form of bickering, but one in which insults are specifically involved. Also compare Argumentum Ad Nauseam, in which only one side keeps repeating their side of the argument, hoping eventually nobody will care to respond anymore.

This goes on until he looks like neither a werewolf nor a vampire. Instead, he becomes the park's biggest attraction as a Big Red Devil.

Did Flower steal the diary?

Lollipop and Flower argue over whether Flower stole the the diary

Did Flower steal the diary?

Lollipop and Flower argue over whether Flower stole the the diary