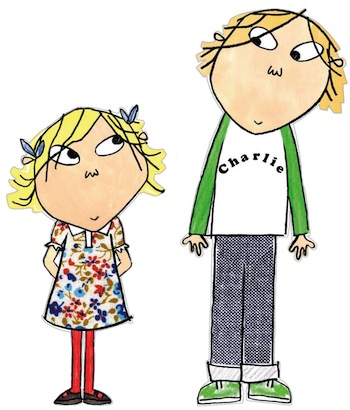 "I have this little sister Lola. She is small and very funny."
Advertisement:

Charlie and Lola is a series of books by Lauren Child, later adapted into a cartoon. The original book was published in 2000. The stories focus on Lola and her older brother Charlie as well as their friends. Lola is an energetic, imaginative and random little girl; Charlie is a patient and kind older brother who has his work cut out (but is always willing) to help Lola learn and grow.

The TV show was seen on The BBC's CBeebies and on Playhouse Disney in the United States. The program was dropped from Playhouse Disney sometime before it became Disney Junior, but repeats were picked up for the 24/7 Disney Junior network. A number of DVD volumes were released. There was an album with music from the television show as well, though it was only released in the U.K. Neither the books nor the television show are currently in production, as far as new material goes. A complete series DVD boxset of the show has been released in the UK, cementing the fact that no further episodes will be produced.

It is occasionally broadcast in Scotland in Gaelic as Charlie is Lola.

As of 2017, the series has been made available freely to stream for those who have Amazon Prime / Amazon Video and was picked up by Universal Kids in December of 2017.