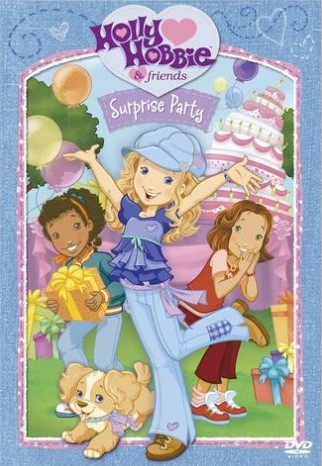 She's got a twinkle in her eye that you can't ignore!note Pictured, the Hey Girls - Carrie Baker, Holly Hobbie & Amy Morris and Holly's dog Doodles

Holly Hobbie and Friends was a series of direct-to-DVD releases focused on a young girl named Holly Hobbie, a girl from the city who visits the town of Clover, to stay with her Aunt Jessie. Holly is accompanied by her two friends, Amy Morris and Carrie Baker, together known as the "Hey Girls." In each installment, they would have adventures with their friends and family and do their best to help others, from trying to restore the joy of life to a widow and her twin boys after the death of the father, to helping a shunned new girl at school find acceptance.

The title of the series was based on the popular author and illustrator Holly Hobbie, though she was only loosely connected to the franchise at best, and most well-known for the picture book series Toot & Puddle and the associated television series and DVD release. It was also based on much earlier toy and doll releases using the Holly Hobbie name, and it was said within the specials that the Holly Hobbie seen in these releases was the great-granddaughter of the original Holly Hobbie. The series had a total of six different releases over four years, as well as a single limited-release music album featuring the songs of Christmas Wishes, and numerous picture books, both ones based directly on the direct-to-DVD specials and unique releases such as Holly's Halloween Adventure and Let's Have a Tea Party!: A Scratch and Sniff Storybook.

The initial releases in the series featured a single story on one disc, while the remainder featured two 22-minute stories and the last DVD featuring Holly's family moving back to Clover permanently, almost as if the franchise was being groomed to be made into an episodic television series, though this never materialized. The specials were, however, presented on Nickelodeon/Nick Jr. and to this day, Nick Jr. maintains two different games for the franchise on its Web site: a dress-up game

and a muffin maker

. The show theme song was performed by popular country artist LeAnn Rimes, who also provided the voice of the widow, Kelly Deegan, in Christmas Wishes.

The video releases in the series were:

The releases remain generally available on DVD and have also been made available on certain download services, such as Amazon Instant Video and the Play Station Network.

In 2018, the franchise received a Live Action reboot, helmed by Warner Bros.. However said reboot is only airing in the US, Canada, Australia and the UK.

Holly Hobbie and Friends includes examples of the following:

Holly, Amy and Carrie discover how much fun they can have if they use their imagination.

Holly, Amy and Carrie discover how much fun they can have if they use their imagination.