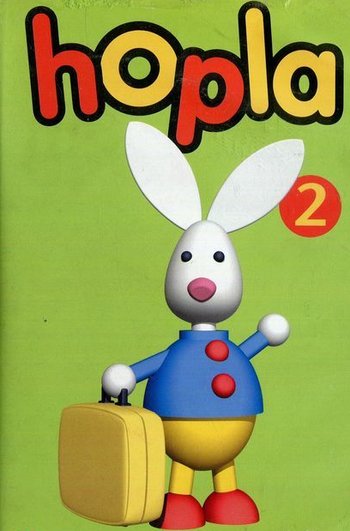 Hopla is a Belgian TV show created and directed by Bert Smets that started airing in 1999. It is targeted at infants. It stars Hopla the rabbit with his three friends, entertaining and teaching the audience. The show formerly aired on BabyFirstTV in the US, but has since been pulled due to licensing issues. However, it has also received DVD releases in the US. Outside the US however, it still airs on BabyFirst TV. The DVDs in the US are distributed by NCircle entertainment, however, which still lists BabyFirst TV as the show's primary station, meaning that there is a possibility that the dispute has been settled and the show returning to airing in the US is very bright.

This children's show has examples of: