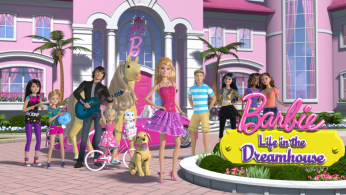 Three minutes of animated pink. And it is glorious. From L-R  Skipper, Stacie, Ryan, Chelsea, Blissa, Tawny, Taffy, Barbie, Ken, Raquelle, Nikki, Teresa. Not pictured: Midge, Summer .
"Years ago, we were uncomfortable and nervous about defining Barbie too much, but today we can celebrate her role in pop culture, and her more than 40-year love affair with Ken."
— Mattel VP Lisa McKnigh
Advertisement:

An animated series that ties in with the popular Barbie toyline, Barbie: Life in the Dreamhouse is a 2012-2015 web series produced by Mattel. The series follows a Slice of Life look into Barbie's, well, life in her Malibu dream house, with brief Reality Television-esque asides into Barbie and her friends' thoughts. Barbie attends parties, goes to the beach, dates Ken, hangs out with her sisters, and does all of the sort of things you would expect Barbie to do. What's unexpected is the massive helping of Affectionate Self-Parody, Lampshade Hanging, Medium Awareness, and Parental Bonus on display, adding up to a lovingly parodic version of the Barbie universe not completely out of line with her Toy Story 3 depiction.

A major difference between this series and other Barbie stories is that this version stars Barbie the doll. The entire universe is Toy Time incarnate, with all of the characters having visible plastic joints. (In fact, Midge, being an older doll, is portrayed as not being fully articulate). All of the technology runs off toy rules (e.g., the showers are powered by hand pumps; the cars use giant D-cell batteries, etc). The show is entirely aware of this.

Barbie's personality is that of a sparklingly cheerful girl who's done, and is good at, everything, to the point of comedy. Her boyfriend Ken is a good-natured klutz who's almost as perky as Barbie, if nowhere near as skilled. She lives with her three younger sisters, parents nowhere in sight, and her three hyperintelligent pets. Her friends, Nikki, Teresa, Midge and Summer often come over to hang out. Meanwhile, Barbie's "friend" Raquelle is often looking for ways to make her life difficult so that she can be the star for once, occasionally teaming up with her twin brother Ryan, who really just wants in on Barbie. And the whole thing is filled to the brim with nods to Barbie's 50-odd year history, along with plenty of other Parental Bonuses and all-ages rapid-fire humor.

The series can be found on the official Barbie website

. Plus, in 2013, a series of TV specials began airing on Nickelodeon. The webseries and the TV specials have become available to stream on Netflix, and select episodes and music videos have made their way to DVD and Blu-Ray as bonus features for some of Barbie's movies. Starting in 2017, Mattel has used actual toys to remake some episodes as Barbie: Live! in the Dreamhouse

This webseries contains examples of: