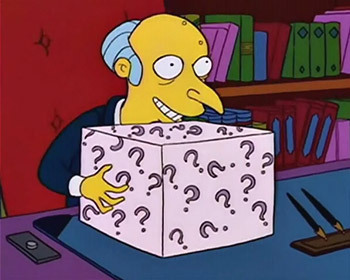 The box! The box!
"Now hold on, Lois! A boat's a boat, but the Mystery Box could be anything! It could even be a boat!"
— Peter Griffin, Family Guy
Advertisement:

All right, contestant, you've made it to the final round of everyone's favorite Game Show The Trope Is Dope. Now you have a choice to make between two fabulous prizes. The first is an all expense paid trip around the world, complete with a complimentary Rolls Royce and $5 million in cash. The second is... the Mystery Box! What's inside it? No one knows. It could be week-old garbage, or the keys to your new mansion. Maybe it's filled with rocks and mud, or maybe fabulous diamonds. It could be anything! Troper, make your choice!

Although this is mainly a game show trope, this can apply to any medium.

Compare Crate Expectations, Loot Boxes (this trope's gaming-related sister), and Blind Bag Collectables. Has nothing to do with J. J. Abrams' favorite trick; you probably want Jigsaw Puzzle Plot for that.