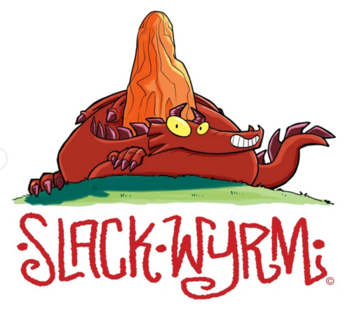 is a Webcomic started in 2016 by Australian children's author, Joshua Wright.

The series stars the Lazy Dragon Ferragus Slackwyrm, an apathetic red dragon who has no treasure because he can't be bothered collecting it. Throughout the series he deals with self-approval issues, living up to preconceptions of being a mighty Wyrm, paying his loyal minions, roasting a few annoying peasants, and, most importantly, getting a good nap.

While it started out as more of the simple joke a day comic, like Peanuts or Garfield, it slowly evolved into having complex interconnecting adventures that spanned multiple comics and introduced many new supporting characters. Although primary a web series there have been four books published, each a compilation of the series into vague story arcs.