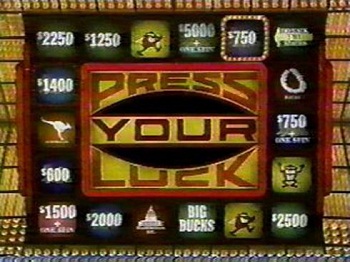 Oh, those pesky Whammies.
"Today, these three players are after biiiiig bucks! But they'll have to avoid the Whammyyyyyy, as they play the most exciting game of their lives! From Television City in Hollywood, it's time to Press Your Luck!"
— Rod Roddy's opening spiel.

Created by the late, great Bill Carruthers and featuring the late, great Rod Roddy and the late, great Peter Tomarken, Press was the second chance of Carruthers' earlier (and far lesser-known today) Second Chance. Three contestants vied for the aforementioned Big Bucks by taking spins on the infamous Big Board, which featured plenty of cash and fabulous prizes, and perhaps the most famous game show villain ever, the Whammy. Land on a Whammy, kiss your winnings goodbye; land on four of them, kiss your game goodbye.

The series ran for three years on CBS' daytime schedule from 1983-86, becoming even more popular in reruns on USA Network and GSN. It served as the fourth episode of CBS' 2006 Game$how Marathon miniseries, hosted by Ricki Lake, featuring an In Memoriam to the recently-deceased Tomarken at the end of the episode.

Press featured one of the most (in)famous game show contestants ever in Michael Larson, who memorized the intricate but repetitive patterns of the Big Board before he came on the show, winning $110,237 in cash and prizes. His game took so long that it had to span two episodes (and it still had to be chopped to fit in the allotted time), his score display actually went on the fritz when he got into six-digit territory, and the board began to go out of its usual slide-change sync by the time he finally passed his spins. Larson's game was so notorious that CBS president Bud Grant, his vice president of programming, Harvey Shepard and his vice president of daytime programming, Michael Brockman, cited them as an embarrassment to the network and refused to re-air the Larson episodes following their initial showing; further, it was barred from airing elsewhere until GSN produced a two-hour documentary about the affair in 2003.

P.S.: Just what exactly is a Flokati Rug?note (It's an all-wool rug that can be used as a wall hanging or a bed throw or before your fireplace to add warmth and beauty to your home.)

Big tropes, no Whammies, stop! Stop at a trope and a spin!

This is Rooooooooooooooooood Roddy! Speaking for Press Your Luck, A Carruthers Company Presentation!