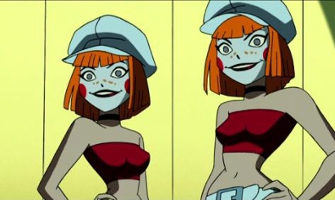 Sometimes a writer wants to include twins as characters but doesn't want to give them different personalities. They're just "the twins", for the most part, and even though they might have different first names, they're essentially the same character. The twins aren't really the Creepy Twins or users of Twin Telepathy; they're written just one character in two separate bodies and have only one personality between the two of them. There's no real difference between the two, and they're generally presented as one consciousness split between two bodies and are never apart.

The polar opposite (no pun intended) of Polar Opposite Twins. If they're on a superhero or villain team of some sort, they'll often be counted as a "single" member (like the Witches 5 from Sailor Moon—which was actually six girls, but two of them were twins). Particularly weird when they're Half-Identical Twins.

A subtrope of The Dividual. Compare Those Two Guys. Often overlaps with Heterosexual Life-Partners.

Example of:
Finishing Each Other's Sentences