Literature / The God of Small Things 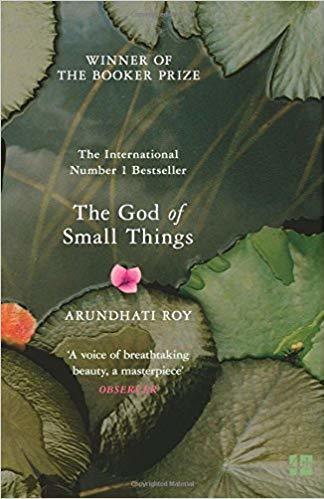 "It didn't matter that the story had begun, because Kathakali discovered long ago that the secret of the Great Stories is that they have no secrets. The Great Stories are the ones you have heard and want to hear again. The ones you can enter anywhere and inhabit comfortably. They don't deceive you with thrills and trick endings."
Advertisement:

The God of Small Things is Arundhati Roy's bitter, funny, and heart-wrenching novel about the ruin of an Indian family through a mesh of tradition, prejudice, politics, and the meddling of a bitter spinster great-aunt. It is told out of sequence, spanning several generations, with the bulk of the story centered around the childhood of Rahel and Estha, fraternal twins who are separated at the age of seven after the death of their cousin, Sophie Mol.

Half-English and all-privileged, Sophie Mol arrives in Ayemenem, India, after the death of her stepfather. Her mother's sensationalizing of the local customs infuriates Ammu, the mother of the twins; filled with the conflicted indignation with the rape of her culture simultaneously as that culture repeatedly stifles and nullifies all that she is as a woman and a single mother, she runs for comfort to the arms of the beautiful untouchable servant working for her family. Baby Kochamma, the spiteful great aunt who hates Ammu's ability to cope with life without a husband, finds out about the affair and, petrified of what consequences it could have on the family name, decides to put a stop to it.

Luckily for her, the disappearance of Sophie Mol in a heavy storm gives her a pretext on which she can have Velutha the Untouchable carted off to prison and out of their lives, but what she does not account for is that Velutha's political party makes him a very dangerous target. Forced to either provide corroboration or admit her lie and be legally responsible for a false accusation, Baby Kochamma coerces the twins into testifying against Velutha by telling them that their mother's freedom depended on their account. Estha agrees to testify and does so, only to experience a horrific realization.