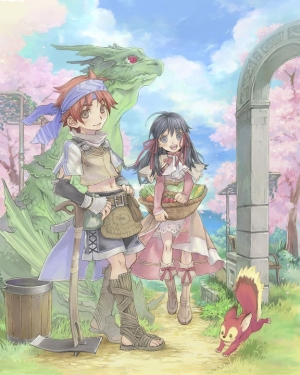 The sequel to the first Rune Factory, also on the DS, it was developed by Neverland Co and released by Natsume in North America in November 2008. It introduced message board requests, marriage rivals, and a playable Second Generation (similar to the Agarest games).

The story begins a few years after the events of the first game, with an amnesiac wandering into a small village named Alvarna and meeting a girl named Mana (and her father, Douglas). He doesn't even remember his own name, so Mana decides to call him Kyle. They happen to have a disused farm, and Mana convinces Kyle to live and work on it. Everything else initially falls into the same formula as the first game: you go into dungeons, farm crops and flowers, battle and tame monsters, befriend everyone in the village and eventually marry someone and have a son/daughter. However, after Kyle vanishes one stormy night, his kid sets out to find out what happened to him and becomes the playable character.