The first protagonist of the second game. Like the first, he stumbles into a town with no memories and is given a farm to tend to. 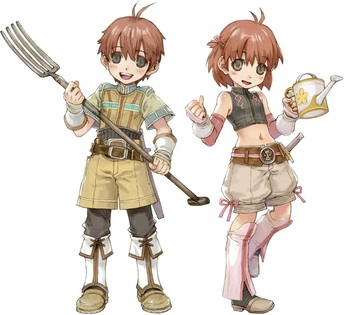 Kyle's children. Depending on which gender the player chooses, they can play as Aaron (the boy) or Aria (the girl) for the second half of the game.

Mana meets Kyle upon arriving at Alvarna. Hearing that Kyle has no memories, she suggests that he move into the house and farm nearby, so he has a home and something to do. Her father is overprotective of her, though she keeps trying to get him to loosen up about it.

For the second generation, she fulfills her dream of becoming a schoolteacher by teaching classes at the school Kyle ends up building. She teaches classes on cooking and accessory crafting.

Cecilia hails from Kardia, but has grown up and moved to Alvarna to become a maid for the de Sainte-Coquille family. She's still as sweet and gentle as she was as a child, and loves her job. She will marry Jake on Summer 14th in Year 2, if the player doesn't have Kyle marry her before then.

By default, she will have a son with Jake in the second generation. She continues working as a maid to the de Sainte-Coquilles.

Dorothy is studying at the clinic to become a nurse, and always carries her doll, Fern, around. She's incredibly shy and can't really talk with strangers, needing some time to relax around others. That's when Fern takes over the talking for her. She marries Barret on Fall 17th in Year 3, if the player doesn't have Kyle marry her before then.

By default, she will have a son with Barret in the second generation. She graduates from being a nursing assistant to a full-fledged nurse, working alongside Ray. 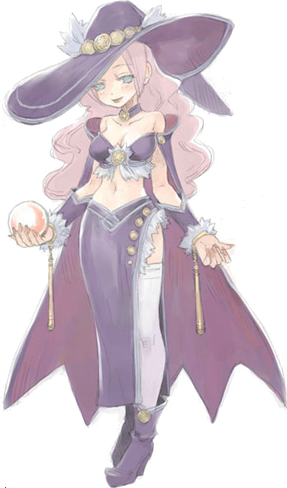 Alicia is the town's fortune-teller and sister to Ray. Her mother disapproves of her carefree lifestyle and believing fortune-telling to not be an actual profession, leading to the two butting heads a lot.

Julia runs the local bathhouse. She keeps up with fashion and does her best to live healthily, wanting others to be that way, too. But she admits that part of her attire is because she's worried that, without her extravagant looks, she'll just be a wallflower. She marries Max on Winter 11th in Year 4, if the player doesn't have Kyle marry her before then.

By default, she has a daughter with Max in the second generation. She retires from running the bathhouse, with Cammy having taken over, and moves into the de Sainte-Coquille mansion.

Rosalind is the only female of the de Sainte-Coquille family located in Alvarna. She is kind and generous, though many don't think of her as such at first. She marries Ray on Spring 10th Year 3, if the player doesn't have Kyle marry her before then.

By default, she has twin girls with Ray in the second generation. She moves out of the mansion and into the clinic after marrying Ray.

Yue is a travelling merchant that heads to Alvarna to sell her wares. She mostly sells items that the townspeople will want to receive on their birthday. She's out to find new ways to make money, though if she gets married to Kyle, she'll stick around Alvarna most of the time.

For the second generation, Yue will sell items for the expansions to the school, like the forgery or kitchen. Her schedule depends on if she's married or isn't.

A half-elf. Unlike his father, he hates humans. He also has a crush on Cecilia and can often be found working at the blacksmith.

In the second generation, he's still working at the blacksmith but his attitude towards humans will have improved a bit. He marries Cecilia (or Yue) and will have a son named Orland with her.

The son of the local doctor, Ray is a aspiring doctor as well. He often tries to mediate the fights between his sister and his mother.

In the second generation, he takes over Natalie's position and marries Rosalind (or Yue). They will have twin daughters named Sera and Serena.

The mayor's son. He appears indifferent towards everyone and everything, but seems to be close to Dorothy. Naturally, he's Kyle's rival if he goes for Dorothy. He makes a cameo appearance in Rune Factory 4 as an equipment appraiser and a father of two.

In the second generation, he will be married to Dorothy (or Yue) and have a son named Leonel. He also becomes a teacher alongside Mana and offers classes on forging weapons and making combat accessories.

The male heir to the de Sainte-Coquille fortune. He's kind and generous, but a bit proud for his own sake.

In the second generation, he tries to act like a mentor to Aaron and Aria and winds up marrying Julia. They have a daughter named Leann.

The local weaponsmith. She's got a obsession with weaponry, and sends Kyle on monster hunting quests. This expands the variety of weapons in the second chapter, though it doesn't do much in the first chapter. Notable that her quests are replayable.

The patriarch of the De Saint Coquille family. Very influential on the town, and holds most of the festivals and contests.

Mana's father. He owns and runs the general store. His worst fear is that someone will steal his daughter's heart.

Voiced by: Tetsu Inada
Dorothy and Cammy's father and pastor of the Alvarna Church. Bears a scar over his right eye from his warrior past. Drinking buddies with Natalie and Douglas.

Voiced by: Tetsu Inada
The mayor of Alvarna. He handles all of Kyle's construction jobs, however, he makes him pay and get the wood. Has problems getting along with his son, Barrett.

Jake's father and the local innkeeper.

The local doctor. She has a difficult relationship with her daughter, Alicia, and Ray has to always break them up when they argue. Though she wants both of her children to go into the medical field, only Ray has interest in it.
Second-Generation "Marriage" Candidates

A little girl who lives in the church with her older sister. She fixes Training Plans for Kyle in order to help him, and can potentially "marry" Kyle's son.

In the second generation, she takes over the bathhouse responsibilities from Julia.

Cammy's friend and the son of Tanya. He prefers playing over doing any sort of work and becomes a "marriageable candidate" in the second generation.

The daughter of Max and Julia (or Yue, if Kyle marries Julia). She's a sweet, charitable girl who has made acquaintances with everyone in the class. She is also a potential "marriageable candidate" in the second generation.

The son of Dorothy (or Yue) and Barrett, and another potential "marriageable candidate". He's often mistaken as a girl, which annoys him greatly. He is also hinted to be a aspiring chef.

The son of Cecilia (or Yue) and Jake, and another potential "marriageable candidate" in the second generation. Though his parents are half-elf, half-human (or in Yue's case, fully human), Orland considers himself fully of elfen blood.

Twin sisters and the daughters of Rosalind (or Yue) and Ray. Although they are identical and have a similar mindset, they are also opposites in their daily lives. They are "marriageable candidates" in the second generation and come in a pair.