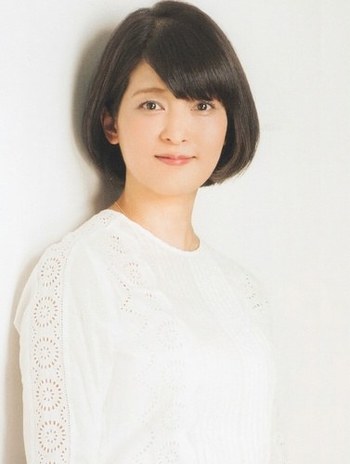 One of the more prolific female Japanese voice actors, Ayako Kawasumi (born March 30, 1976 in Tokyo, Japan) had a decent start in the 90's but really boomed after 2000. She has a great versatility in her voice, and whereas her early roles are either Genki Girls or everyday-sweet-neighbor friends, her later roles show a wider range. Her role as Saber on Fate/stay night made her one of the most popular seiyuu to this day.

In addition, Ayako Kawasumi is a skilled pianist. Has a big-sisterly friendship with younger but no-less-popular seiyuu Mamiko Noto. Has had MANY couple roles with Tomokazu Seki. Chiaki's hatred for Nodame? Requited by Gilgamesh towards Saber. Also has "relationships" with Rie Kugimiya, Rina Sato, Satoshi Hino, and Ryoko Shiraishi.

Tropes pertaining to her successful career