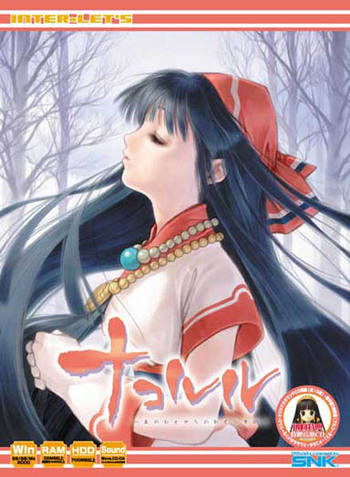 Nakoruru ~Ano Hito kara no Okurimono~ (known as Nakoruru ADV overseas, literally meaning "Nakoruru: The Gift from That Person") is a Visual Novel developed by defunct company Inter-Let's for SNK for PC in 2001 and Sega Dreamcastnote distributed by VN company Kool Kizz in 2002. This game tells the story of one of the characters from SNK's popular fighting series Samurai Shodown: the girl Nakoruru. She comes from Kamui Kotan, a small village on Japan's most northern island, Hokkaido, which is populated by Ainu, a nation with its own culture and traditions. The time of the game is set somewhere between the fighting tournaments where Nakoruru participates. She comes back to her home village, but the village elder senses evil, and her friends are worried about her. This is where you enter the picture - you play Mikato, a little girl who was told by the village elder to keep an eye on Nakoruru. The relationship between Mikato, Nakoruru, and other village inhabitants form the core of the game's story.

Although was developed for an external company, various SNK's big names were involved on this game, to name two of them: character designer Senri Kita (Samurai Shodown 3D game seriesnote 64 games, Warriors Rage, Edge of Destiny, V and the Pachinko game, as well other SNK games as various The King of Fighters and Garou: Mark of the Wolves) is the artist of the game; and seiyuu Harumi Ikoma, the voice of Nakoruru in the series reprised her voice for the visual novel and the anime.

Apart of the game, an anime adaptation was made in 2002 by ARMS Corporation, being the third anime adaptation on the Samurai Shodown series, after The Movie and Asura's Zammaden OVA (based on 64-2 game), all made by different studios. The characters designer was Yasuomi Umetsu, the man behind Kite and Mezzo Forte and was directed by Katsuma Kanazawa, a famous Hentai director who also made Ikkitousen: Dragon Destiny. Also, there're various Names to Know in Anime behind the voices of the other characters of the OVA. Originally intended to be a full 13 episode OVA series, this was cut down to 2 episodes due to limited funding. After the 1st episode was released however, the production of 2nd episode was cancelled, leaving this with only one episode.

This game was released in Japan only with no official translation overseas. However, there're FAQs that translated the game in case you want to play it anyway. A different case is the OVA, which was released outside Japan and is the only official release of this Spin-Off based on Nakoruru.

The official site of the visual novel is here

(offline, hosted on Wayback Machine). There're articles on the SNK Wiki for both the game

. For the visual novel, there's an entry on The Visual Novel Database

and a page on Anime News Network

For tropes about the exclusive characters, you can see the Other Games section in Characters page for Samurai Shodown. Nakoruru, as well Rimururu and Rera, can be found in the same page but in the 2D Fighting Games section.

Nakoruru ADV, the game and the OVA, contains these tropes: