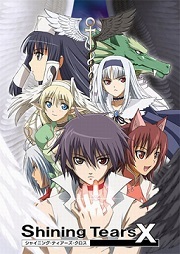 Shining Tears X Wind is a Japanese anime based on the PlayStation 2 games Shining Wind. Shining Tears X Wind presents an adapted version of Shining Wind's story, seen from the perspective of the character Souma. It is directed by Hiroshi Watanabe and produced by Studio Deen. The series started airing in Japan on April 6, 2007, and finished airing on June 29, 2007. The anime has the same opening and ending themes as the game Shining Tears. A sequel to this is a mobile game entitled Shining Wind X, which was released in January 2008.

It is about four High School students discovering End Earth, a fantasy world that is parallel to theirs. Souma Akizuki the show's protagonist becomes the world's protector and must stop his two friends Kiriya and Saionji from killing each other. The series runs for thirteen episodes.

A character page is under construction