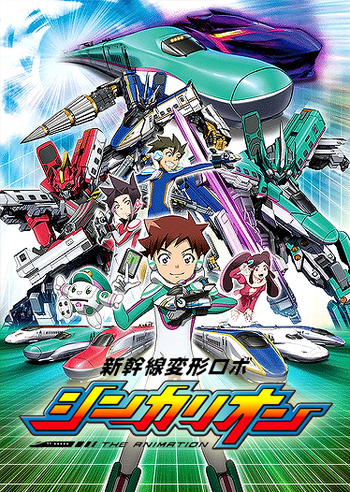 , Shogakukan-Shueisha Productions, and Takara Tomy which premiered on January 6, 2018. The anime is based on the popular transforming train figure line of the same name by Takara Tomy.

The story takes place in modern-day Japan, where it was plagued by an unknown type of virus that is converting objects and life forms alike into bio-mechanic beings. In order to further research and combat these types of enemies, the Japan Railways Group created a nationwide secret organization called the Shinkansen Ultra Evolution Institute in researching, developing, and deploying combat mechas based on the forms of their bullet trains (or shinkansens

) called "Shinkalions" to chase those viruses down. But because the Shinkalions requires a high sync ratio in order to pilot them, combats were not as effective.

Here enters our Kid Hero, Hayato Hayasugi, who initially chased behind his dad, Hokuto Hayasugi to give him his work pass, only to find out not only his dad is one of the members of the Shinkansen Ultra Evolution Institute (S.U.E.I.), but also one of the core developers of the Shinkalions. When a bio-mechanical monster appears and attacks the S.U.E.I., Hayato himself just happens to be a perfect match for one such Shinkalion: the E5 Hayabusa.

After a brief father-and-son discussion over the matter, Hokuto allows his son to pilot the E5 Hayabusa to take down that monster, and the mission ended with success in under ten seconds.

While fully aware that the method of employing children pilots is indeed Harmful to Minors, the S.U.E.I., to the best of their abilities, acknowledged this is by far the best option to fix their national problems in the long-run, prompting the institute to proceed in expanding their search, and scout potential underage pilots with extra caution and respect their candidates if they intend not to take part of the project.

And so begins Hayato's wild train ride to save Japan from evil with his E5 Hayabusa...

Shinkalion’s television series ran for a total of 76 episodes, and was domestically praised in bringing the Transforming Mecha genre back in light to a new generation of kids whose parents grew up with the likes of 90s mecha shows, particularly Evangelion and the Brave Series.

An sequel movie, titled Shinkansen Henkei Robo Shinkalion THE ANIMATION: The Mythically Fast ALFA-X that came from the Future, was announced and released in theaters on December 27, 2019. The movie is a Crossover with Neon Genesis Evangelion, Vocaloid, and Godzilla, prominently featuring Shinji Ikari, Hatsune Miku, and a ice-based version of Godzilla. This portion of the franchise appears in the final DLC of Super Robot Wars 30, with the exception of Shinji, Miku and Godzilla.

A second series, this time focusing on a different set of pilots, was announced in 2021. Titled Shinkansen Henkei Robo Shinkalion Z, the series premiered in April.

WARNING: The train on bound to this station contains some unmarked spoilers, especially the ones coming from the movie. Please be advised to approach this station with caution and care as the train arrives to its destination. Thank you and have a nice day!