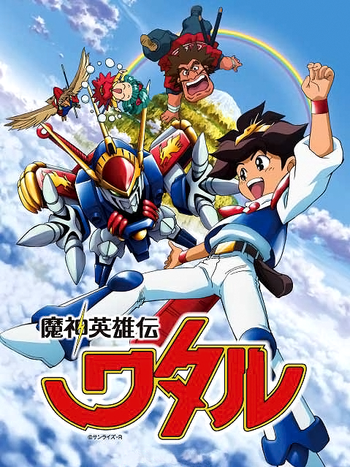 Athletically-gifted 9-year old Wataru Ikusabe brings his self-made clay robot sculpture from art class at school to life by unknowingly accessorizing the model with a couple of gemstones that he stumbles across, and finds himself transported to a magical kingdom called Soukaizan (創界山；”Creation Realm Mountain”).

The townsfolk residing at the foot of the mountain proclaim Wataru as the savior. To aid him in combating the evil that has taken over Soukaizan, a spirit of a dragon god resides within Wataru’s clay robot, bringing it to life as a Humongous Mecha called "Ryujinmaru".

Throughout his journey, Wataru is accompanied by two of the finest warriors Soukaizan has to offer: a Dual Wielding Samurai by the name of Shibaraku Tsurugibe, who trains Wataru in the way of the sword, and Himiko Shinobibe, a spirited young Kunoichi, through all forms of problem-solving, battles, drama, laughter, and a whole lot of fun.

The first two installments were immensely popular with the Japanese and East Asian demographics that it spawned lengthy Original Video Animation to serve as Prequels to their next respective installments note  barring Super since that's a reboot , as well as spinning out separate stories in the form of radio dramas that focused on the backgrounds of individual characters.

The titles presented for this series are as follows:

Common tropes that are seen throughout the franchise are the following: