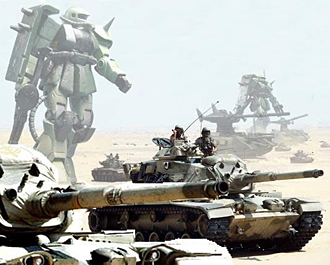 There's no way they can lose this war now.note Technically "they" did.
"Behold! Today is the day that weapons learn to walk upright!"
— Skullface, Metal Gear Solid V
Advertisement:

Real robots are what happens when Humongous Mecha and Military Science Fiction collide; they're mecha that are treated just like any other weapon of war. Unlike the Super Robot, real robots are typically mass produced units designed and built by governments and large corporations, rather than something designed and built by (or for) a single person—though the occasional Super Prototype or Ace Custom may be an exception. While real robots might be the dominant weapon of the setting, they frequently appear alongside other forms of combat vehicle (like the Cool Tank, Cool Plane, and Space Fighter) rather than replacing them entirely. In other words, instead of being the be-all and end-all of a conflict, real robots are simply another cog in the war machine. As such, Real Robots tend to look plainer than their Super Robot predecessors. Simple and/or drab colors, heads that are either blank, cycloptic, or resemble a gas mask are common, if the mech has a head at all—the general humanoid form is more likely to be relaxed, if not thrown out entirely. Indeed, in many settings, Real Robots look more like Walking Tanks than giant soldiers. Real Robots also tend to be smaller than your average Super Robot. It's fairly common for them to be less than forty feet tall, or even as small as ten feet.

Real robots also tend to be harder than super robots on Mohs Scale of Science Fiction Hardness, often involving elaborate forms of Applied Phlebotinum to explain why giant robots are physically possible to create and tactically advantageous to use. On the harder end of the scale, this explanation may become a full-blown type of Minovsky Physics. Even on the softer side of the scale, real robots usually take into account things like the immense cost in time, material, and expertise of operating a machine as large and complicated as a giant robot would inevitably be. Expect to see references to things like extensive maintenance requirements, the logistics of supplying fuel, ammunition, and spare parts, and other such ancillary issues.

Of course, all of this won't stop an Ordinary Highschool Student with no one but a Ragtag Bunch of Misfits for support from Falling into the Cockpit and saving the day when the plot requires it, but it will make such a feat seem all the more impressive when it happens. Oddly enough, because of the emphasis on realism for the mecha, real robots tend to make their pilots be the ones to stretch Willing Suspension of Disbelief instead. After all, when you can't rely on pure Hot Blood and The Power of Love to save the day, then it's entirely up to the main character's Heroic Spirit and Improbable Piloting Skills to do the job instead—and how unrealistic is that?